Things to know about Lightning Cables 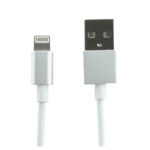 When the iPhones and iPods (versions 5 and up from 2012) were introduced, so was the term and technology for the “Lightning cable”, an 8-Pin connector with a shield which could act as a 9th Pin. The “Lightning Cable” technology implied that the cable as it relates to charging mobile devices was somehow faster over its 30-pin predecessor or compared to a USB type-A to Mini or Micro-B cable.

Lightning cables are a non-directional (reversible) cable connection; they have no keyway to guide the user into a USB port for connection. This gives it an advantage compared other USB cable connectors that might be used for charging mobile devices. The charging current (Amps) supplied through a USB Lightning Cable is the result of the charger that is actually supplying that current from the car or wall adapter.

Note: The “Lightning” connector is a propriety 8-pin computer bus and power connector developed by Apple to replace the preceding 30 pin dock connector. 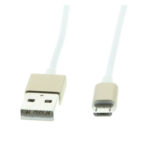 connector versus the Micro-B connections, the basic outcome is that although differences in design of the connector may be visually unique, the design concept itself came to be from an accessibility viewpoint, not necessarily for a performance boost. Both Micro-B and Lightning cables can charge as well as power a mobile device. The Lightning cable itself is only for use with USB 2.0 specifications and has not been manufactured to support use with USB 3.0 or 3.1.

USB Micro-B voltage is 5 Volts DC and charging current rating of 1.5, the difference between the two is negligible because a mobile phone will only draw what it requires thanks to built-in safety precautions in the charging circuits.

While the charging Amps vary slightly, the amount of current needed to charge mobile phones is 1 Amp, the end result is that any device connected to either type of cable will only yield what the mobile device is rated for in charging Amps. Speed is not increased because the cable itself is not a device, it is an accessory to carry power to the device.

Charging with Lightning or Micro-B

We all know that when you purchase a new phone that it will generally come with a USB car or wall charger/adapter. These chargers are meant to output what is needed for the mobile device to charge appropriately. Charging with these devices or a charging station that has been manufactured to maintain a constant dedicated current is the best way to go.

If you charge a mobile phone, iPad, or other tablet from your computer, the charge time increases because computers will only put out 0.5 Amps for charging, this is half of what is needed for charge mobile phones and less than half for tablets.

What does it mean?

Lightning cables and their 8-Pin connectors are needed for Apple iPhones and iPods, this a solution developed by Apple for their products, now that other “Lightning” cables and connectors have come on to the market that mimic this 8-Pin connection technology, the option of who to buy from has also opened up. You have more choices now than in 2012 when the Lightning Cable first appeared.

What are your thoughts about the Lightning Cable proprietary design?

Based in the U.S., our friendly staff is ready to help you with any questions you may have.

Returns & Claims
Begin the return process and fill out an RMA form.