A bit of history…

Going on a time trip in electronic communication today, back to when telecommunications really hadn’t begun as of yet and the serial devices we know today did not exist. The DB-9 pin structure, screw-lock cable connectors, and USB interfaces between the two to connect our communication streams and terminal data hadn’t been thought of yet. Early communications started with beacons, smoke signals, and the telegraph, this was back in the late 1700’s where despite the archaic method of communicating, it was quite an advancement back then.

Jumping ahead briefly into the mid 1800’s the use of electrical telecommunications had begun and was being utilized in Europe. Because of that advanced method of communication at the time, it started what was to play an important role in today’s history in the communication industry.

Moving ahead to the 1900’s, a revolution in non-wired (wireless) telecommunications began in with ground breaking developments in radio communications. Developers in the field of electronic telecommunications  include Charles Wheatstone and Samuel Morse for the telegraph, Alexander Graham Bell known for the telephone at that time, and radio developers Edwin Armstrong and Lee de Forest. The growth of compressed data that could be sent grew slowly but surely with 281 petabytes of information in 1986, to 471 petabytes in 1993, to 2.2 exabytes in 2000. This was essentially the equivalent of two full newspaper pages per day per person at the time. 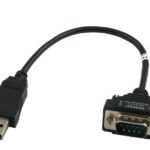 In telecommunications, the RS-232 protocol is a standard in the use of serial communication transmission of data. The RS-232 is the base signal used in computer terminal, or Data-Circuit Terminating electronics. It is most commonly used in today’s serial communication ports through a PC or Laptop and although serial ports seem to be fading from newer equipment on the market, the need for serial communication use isn’t. RS-232 Serial port usage and signals have changed with demands on industry as we now have RS-422 and RS-485 signals.

Adapters, Converters and Hubs, Oh MY!

The way in which RS-232 serial communication is used and applied has also changed. New methods of acquiring Data 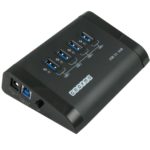 and accessing it from a Desktop or Laptop computer system are constantly being developed in the form of adapters from a USB port, converters that interpret Data through electrical connection to a computer, and hubs that can be used as an Ethernet communication device over a network. These methods and new devices to enable RS-232, RS-422, and RS-485 are keeping serial protocols active and growing in their use even in the computer and communication markets today.

Based in the U.S., our friendly staff is ready to help you with any questions you may have.

Returns & Claims
Begin the return process and fill out an RMA form.